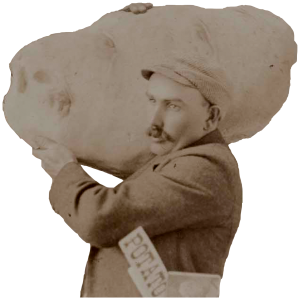 Joseph B. Swan was proud of his potatoes.  On his farm outside Loveland, Colorado, in the late nineteenth century, he grew 26,000 pounds of potatoes in one year on a single acre of land.  He also claimed to have grown a giant potato.

A friend of Joseph, the editor of the Loveland Reporter, came up with an idea to help Swan promote his spuds at an 1894 street fair.  The idea was to create a hoax photograph of Swan showing off a truly massive potato – one as large as a boulder.  Joseph could then pass around copies of the photo as an advertisement.

The photographer took a photo of a potato and enlarged it to mammoth size.  He then cut out a wooden board the size and shape of this enlarged image and he attached the photograph to the board.  Finally, he posed Joseph holding this giant faux-potato on his shoulder.

Copies of the photograph began to circulate.  Word of the mammoth potato rapidly spread both nationally and internationally, causing Swan to be flooded with inquiries from people who wanted either seeds from the mammoth potato or pieces of it so they could grow their own.

Joseph repeatedly explained that the photo wasn’t real, but had merely been intended as an advertisement and that he thought no one would take it seriously.  This photo is considered the first photomontage in history.